If you are hitching your happiness to things being a certain way, it’s a setup for suffering.

As General Conference approaches, Latter-Day Saints are going to be hearing conflicting messages on social media, and they can generally be grouped into two themes:

The first theme is one that views Conference as a time of rejoicing. It affirms that Conference speakers are good people and that their messages are inspired. Whatever they say, it will be for our good.

The second theme views Conference as threatening. It is neutral or negative about the motivations and/or divinely-ordained callings of the speakers, and it doubts the capacity of the hearer to process conference messages in a healthy way.

Both themes reflect bias, and bias is not a bad thing. Everyone brings their biases and worldviews to every part of life — including faith — and people who claim to be unbiased are just demonstrating another form of cognitive bias called the Bias Blind Spot. For a lengthy list of cognitive, emotional and other forms of bias, see here.

There is no such thing as an unbiased viewing of General Conference, but it is possible for us to be mindful of what we bring to the Conference experience and respond to our biases (and conference) in ways that lead to our growth.

In the list of biases linked above, there are some obvious biases that will cause us to reject conference messages, and even reject the validity of General Conference outright. The biases that lead to unbelief and atheism are good examples of this. But there are other biases that can torpedo the conference experience among church members:

Cynicism is the constant expectation of disappointment. It’s an emotional bias toward negativity that we employ in response to some disappointment we have experienced, and then we gravitate to cynicism in an attempt to protect ourselves from further disappointment. Cynicism is like a vat of emotional acid into which we dip all of our church experiences; we never get our hopes up and we never fully rejoice, because we are always afraid that those positive things will come crashing down in some negative experience. If we can stay constantly doubtful and negative, we can free ourselves from the pain of feeling surprised by disappointment.

Caitlin Moran says of Cynicism:
When cynicism becomes the default language, playfulness and invention become impossible. Cynicism scours through a culture like bleach, wiping out millions of small, seedling ideas. Cynicism means your automatic answer becomes “No.” Cynicism means you presume everything will end in disappointment.
And this is, ultimately, why anyone becomes cynical. Because they are scared of disappointment. Because they are scared someone will take advantage of them. Because they are fearful their innocence will be used against them — that when they run around gleefully trying to cram the whole world in their mouth, someone will try to poison them.

Chloe Bonini offers this insight:
Habitual cynicism in others is a learned behavior. Cynicism becomes a habit because that person feels comfortable and safe with a wall up, constantly ready to assume the worst in every person and every situation. They feel safe being able to put themselves in a position to advocate for their own righteousness while they scrutinize the flaws and shortcomings of everything and everyone around them.
Habits are hard to break. They become habits for a reason. Things like habitual cynicism are behaviors people have to want to unlearn, and bringing up this problem to this person will more likely offend them than cause them to examine their behavior.
A cynic will never be fully willing to assume that someone else is correct to be optimistic or positive. A cynic will constantly tell you your optimism is ignorance, and the world doesn’t work like that. A cynic adopts these attitudes because they also take up this rhetoric with themselves. Every failure should have been predicted. Every success pales next to everything that is wrong. A cynic will avoid paying attention to what can work, what will work, or what does work. Cynicism comes from lack of self belief, and if you let it, a cynical person can wear you down.

I personally know cynicism from experience; I have spent years in it. From my personal experience, cynicism is to the spirit what cancer is to the body. It is that serious, and I don’t say that lightly. During my cynical years, there were two conference talks in particular given by Elder Jeffrey R. Holland, that I was only able to receive as harmful. I avoided those two talks for years, and only revisited them recently now that I am in a better place cognitively, emotionally, and spiritually. Those talks are no longer troubling to me in any way. Transitioning out of cynicism and back to faith was a very hard process, but it is possible.

Worldview is a form of bias, or we might say it’s a family of biases. Jeffrey Thayne’s recent FAIR presentation was the best discussion of the impact of worldview that we have received to date, and it explores the impact of these differing stories on our experiences with the church. 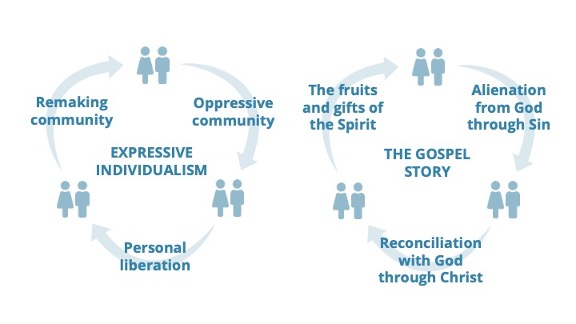 These stories tell us powerful things about the world, and what we should expect from life in general and the church in particular. The story on the left (expressive individualism) is told to us primarily through our entertainment, and it’s very flattering and seductive.

The prophets are about to speak to us. When they do, I am going to evaluate their words using a host of assumptions and standards that are completely foreign to Christianity, and that is how I will determine the validity of what the prophets tell me.

That is what we are saying when we approach General Conference with a secular Western worldview like expressive individualism.

Anger is a powerful emotional bias, similar to cynicism. The world’s foremost researcher on anger in our thought processes is Harvard’s Jennifer Lerner. I often cite a passage in one of her studies:

anger increases:
1) a desire to blame individuals,
2) tendencies to overlook mitigating details before attributing blame,
3) tendencies to perceive ambiguous behavior as hostile,
4) tendencies to discount the role of uncontrollable factors when attributing causality and
5) punitiveness in response to witnessing mistakes made by others.

In another study, she points to anger as a “high-certainty emotion” that

increased heuristic processing by increasing reliance on the source expertise of a persuasive message as opposed to its content, increasing usage of stereotypes, and decreasing attention to argument quality.

In other words, when we are angry we are literally unable to rationally evaluate messages from other people, and unable to see the quality of another person’s thinking. If cynicism is a vat of acid, then anger is like a bonfire into which we throw every message that comes our way, no matter how good and thoughtful it may be.

It is hard to make any kind of a quick shift in bias. There are things we can do like a hard physical workout that floods the body with endorphines, but that chemical happiness is temporary. I don’t know of any kind of light switch that we can flip that can turn off cynicism or anger, or shift our worldview to make us receptive to the goodness and holiness that are conveyed in General Conference. We know that the world we live in is increasing in turmoil and wickedness, and we should expect that conference messages will not always be happy; sometimes they will be tough and sharp. Part of shifting our bias can be just a matter of coming to conference with this understanding.

I like the videos linked below, from mindfulness teacher Tara Brach. The teachings that she presents here are not an instant fix, but she does a great job of helping the viewer to understand the discipline of happiness, the “re-patterning” that we can do to change our relationship with our feelings and our narratives, and increase our capacity for happiness. There are so many influencers who paint a picture of conference as being a threatening event looming over the church, and these messages have the effect of increasing anxiety and fear. They are self-fulfilling prophecies of trauma, and they are false and unnecessary.

Tara Brach is fond of teaching the two Buddhist concepts of happiness: Pamoja and Sukha.

Pamoja is happiness that depends on things happening or not happening: eating a food we like, getting a certain job, not being disappointed by someone, etc. When our seeking for happiness is based on Pamoja, we are authoring our own suffering and disillusionment. Sukha is happiness that does not depend on anything in the world being any different from what it is. Buddhist teachings point toward Sukha by reducing attachments- the conditions that we create for happiness. Mindfulness is a practice of compassionate and nonjudgmental awareness of the present, that reduces the power of attachments and other things that would poison our happiness.

Finally, I strongly recommend my BFF Jeff Bennion’s article for North Star on preparing for Conference. Jeff is a great therapist and a great human being, with some important insights to offer.

1 thought on “Positively Biased for Conference”